PEROXAN PB is used for the (co)polymerization of ethylene, styrene, acrylonitrile, vinylacetate, acrylates and methacrylates.

PEROXAN PB is used for the curing of unsaturated polyester resins.

PEROXAN PB is used for the crosslinking of natural rubber and synthetic rubber, as well as polyolefins. 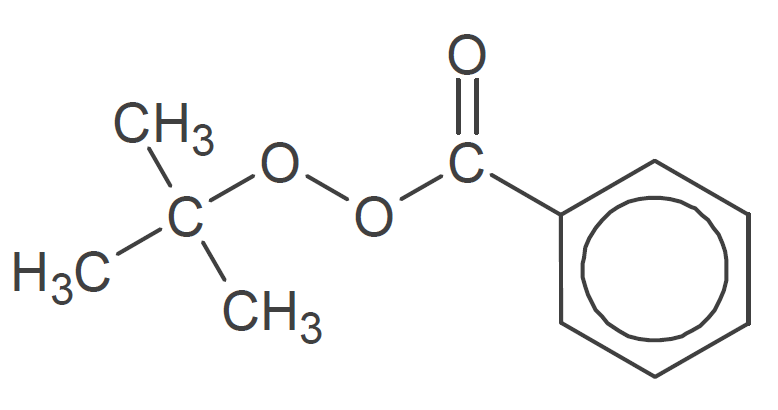 in an EPDM compound:

Oxidizing agent. Decomposes violently under the influence of heat or by contact with reducing agent. Never mix with accelerators.

Other applications:
PEROXAN PB may also be used for the (co)polymerization of acrylonitrile and vinyl acetate.


PEROXAN PB is used for the curing of unsaturated polyester resins at high temperatures.

PEROXAN PB is preferred for the curing of UP resin based hot press moulding formulations in the temperature range from 140° to 160°C.

PEROXAN PB is often times used in combination with a high reactive peroxide like PEROXAN BCC or PEROXAN MI-60 K as kicker in in formulations for pultrusion processes in the temperature range of 100° to 140°C.

In combination with a cobalt accelerator e.g. PERGAQUICK C100 (10% cobalt), PEROXAN PB is applicable for the cure of UP resins in the temperature range of 70°C and higher.

Depending on application and working conditions, the following peroxide and when applicable cobalt accelerator dosage levels are recommended:


PEROXAN PB is recommended for the crosslinking of NBR, SBR, EP(D)M, LDPE and EVA.
Rubber compounds containing PEROXAN PB have moderate processing safety in combination with a very high speed of cure.

Please refer to the material safety data sheet (MSDS) for information concerning safe storage, use and handling of PEROXAN PB. This information should be thoroughly reviewed prior to acceptance of this product. The MSDS is available for downloading at www.pergan.com or through contacting Pergan directly.

The information presented herein is true and accurate and to the best of our knowledge, but without any guarantee. Since the conditions of use are beyond our control we disclaim any liability, including for patent infringement, incurred in connection with the use of these products, data or suggestions.

Here you can download safety data sheets according to Regulation (EC) no. 1907/2006.

Safety Data Sheets are an important source of information on chemicals, such as identity of the product,
occurring hazards, transport, safe handling and measures for prevention in case of danger